Vidic: The Best Goal I Have Ever Seen Live 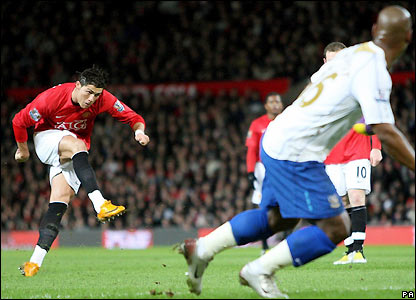 Nemanja Vidic returned to the United team after a virus kept him out of our FA Cup victory over Spurs at the weekend. With thirteen minutes played, he ensured that United kept up their brilliant defensive record in the league, which boasts just three goals conceded at home, and was witness to a brilliant goal.

Cristiano Ronaldo is on the form of his life and I imagine it would be rather unusual now to see even two games go by without him scoring. Last night against Portsmouth, he added another two goals to his tally, making it 27 in 27. His second of the night was a brilliantly executed freekick, which has left his United team mates lavishing him with praise.

“It was unbelievable,” said Vidic. “I think it was the best goal I’ve seen in a game I have played in.”

Michael Carrick was also quick to praise Ronaldo, saying “I was in the wall, trying to block David James’ view. I just turned around and saw it go in the top corner. It was a fantastic free-kick, probably the best one he’s scored. It was nice to see it fly in.”

Was it his best ever goal?