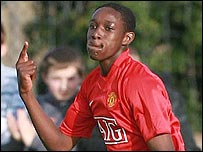 Manchester United are in the process of introducing more youngsters in to the first team, with the likes of Wellback and Simpson, as well as the Brazilian twins, Rafael and Fabio, training with the first team.

The Reserves got a taste of what it is like to play with the big boys earlier this week, when Gary Neville lead out our lads in the match against Liverpool Reserves.

Nemanja Vidic feels as though the set up at United is perfect for integrating youngsters in to the first team, with any young player being eagerly welcomed by the more experience ones.

“The first time any young players come to train with us we make them feel like part of the team,” he said. “They train hard, they want to improve and they have great examples to follow in Ryan Giggs, Paul Scholes and Gary Neville. They see players like that and then work hard to reach the same standards. So far, all the young players have done well and I think we have a great future here at United.”

Which of our Reserve side are you most excited about seeing make the transition to the first team?