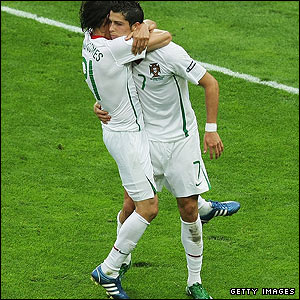 Scored one and unselfishly assisted another against the Czech Republic. At the very least, he’s bumping up his transfer fee with every game he plays in the Euros!

It’s a shame we can’t take the same enjoyment from Ronaldo’s performances as we would if we knew for certain his future, for the next season at least, was tied to our club.

On the upside, at least Chelsea’s Petr Cech is on the losing side against Ronaldo again. “Now I have another match against Ronaldo and he’ll be the main man for Portugal,” Cech said earlier in the week. “But hopefully this time I will be celebrating.” Unlucky.

Regardless, the lad is still a United player and I’m not going to throw the towel in just yet. In 2006 it appeared to be a done deal that he was off to Real Madrid, but he’s enjoyed two trophy filled seasons since then.

‘One trick pony’ they called him, ‘no end product’ they said, ‘too selfish’ we were told. Yet with every passing game over these past two years, Ronaldo has stuck two fingers up at all those ABUs who took time to criticise him.