Wayne Rooney Gets His Wish 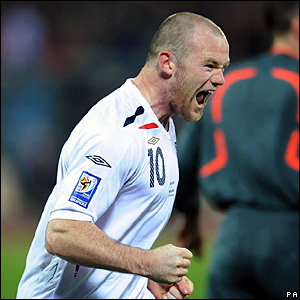 Wayne Rooney scored two goals for England tonight, with his lovely footwork assisting the goal for Steven Gerrard. Liverpool’s captain should have added a second to his talley, yet managed to miss an open goal from a couple of yards out.

After scoring two goals against Kazakhstan at the weekend, as well as three goals in his previous three matches for United against Blackburn, Aalborg and Bolton, Rooney is certainly hitting top form.

Is this the season United fans have been waiting for? When his statistics speak for themselves against the doubters, instead of us having to insist that they’d agree with us if they watched him every week like us…

With his goal in the World Cup Qualifier against Croatia in September, Rooney has now scored in each of the last three outings for his country, quieting the critics who claimed he wasn’t the same player as the one who dazzled for England in Euro 2004.

“It’s always been the case that my goals come all at once, then a little break and then they come again,” Rooney said earlier in the week. “I would like to do it a bit more consistently and keep scoring all the time.”

The last time Rooney had such a run of goals was over a year ago, scoring in seven consecutive matches, including two goals in two games for England.

Can he better that tally this year and keep the goals coming more consistently?