We've Had Money To Spend Because Of Academy Sales... Unlike Rivals 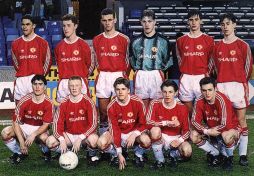 Since “Fergie’s Fledglings” because the biggest thing since the “Busby Babes”, the pressure has been on the Manchester United academy to produce excellent talent.

When looking at the squads of our rivals, it’s bizarre that United’s academy is sometimes viewed as a bit of a failure. As if being unable to bring through a group of players like we did in 1995 means our academy isn’t good enough. We’re no West Ham but we certainly fair well in comparison to the other clubs in the top four.

Jamie Carragher emerged from his youth team in 1996. John Terry and Steven Gerrard did in 1998. Ashley Cole was the latest established player to come from the Arsenal academy (by this, I mean they joined the Arsenal academy as a kid… not poached by the Arsenal academy after making a name for themselves in the youth scene elsewhere. Cesc Fabregas, Gael Clichy, Kieran Gibbs etc. all came from other clubs) but he isn’t there anymore.

In this time United have produced three first team players in Wes Brown, Darren Fletcher and John O’Shea who have close to 900 appearances between them. However, producing players for our first team isn’t the only successful element of our academy.

Red Rants looked at the purpose of academy this week and it’s interesting to see the positives it has brought us.

Whilst rival fans have a lot to say about the money we spend, it shouldn’t be ignored just how much money our academy brings in. Just looking at the past few years

Whilst we’ve reinvested a minimal amount of money in pinching talents like the da Silvas, Possebon and Macheda, we continually produce our own good quality players.

Sylvan Ebanks-Blake, David Healy, Danny Higginbotham, Kieran Richardson, Chris Eagles, Richard Eckersley and David Jones, amongst others, are recent former academy players, unearthed by United, who will be playing Premiership football next season. Which other top four club academy can boast anything like that?

Whilst it’s always great to see young players come through the system it isn’t something that can be guaranteed. Just because a player looks full of potential when they’re 16-years-old, it doesn’t mean they’re going to be able to do it on the big stage when they’re in their 20s. So, if we can make a stack of money from selling them to a clubs that better suit their ability, then it should only be seen as a positive thing.

We have produced more first team players than our rivals and we’ve made loads more money than they have from selling academy players on. Of course we’d like to see even more players come through but in an age where football seems to be entirely based on how much money a club has and how many foreigners they buy, it’s good to know that Manchester United can still do things the old fashioned way… which is more than can be said of Liverpool, Chelsea and Arsenal!