What A Difference A Shirt Makes...

As the summer of 2006 came to an end, following a season where our team had been ravaged by injuries, the last thing we wanted was to be without arguably our two best players at the start of the coming season. When, ludicrously, the FA dished out three match bans to both Rooney and Scholes for incidents that happened in the pre-season, we were left feeling livid. When Neil Mellor of Liverpool was sent off in the same tournament a few years prior, or Ade Akinbiyi sending off the following day, resulted in no FA action, United fans were left to tut, roll their eyes, and talk of ABUs.

The fact that Rooney’s “challenge” was never worthy of a red card, not in any league in the World was that a justifiable red card, was irrelevant. The FA harped on about how the incident had been reported to them, so they just had to take action. The press went on about Rooney’s temperament, about how he had been sent off for a second time that summer, about how he needed to learn to control himself.

As United cruised to Community Shield victory yesterday against Chelsea, Liverpool were playing against Fayenoord in a pre-season friendly. “Gerrard, 27, appeared to raise an arm at Theo Lucius following a late tackle by Royston Drenthe on the Reds captain, which resulted in a melee,” reported the BBC. Appeared? No, it’s nothing to do with appearance. Gerrard DID raise his hand to Lucius, in the form of a fist to the face.

The BBC continues, ‘Six Reds players were booked in the friendly but Benitez said: “I do not think Steven will be in trouble. There was a lot going on. Maybe you should talk with the referee.”
There were nine yellow cards overall in the game and Benitez clearly felt that the referee did not adequately control matters. He added: “Maybe these kind of games are more difficult with a local referee in charge. They become even more difficult. I am not bothered really about what went on and how the lads were treated.”’

I scanned through the papers today, just to confirm what I already knew. The Mirror reports, “The game in a packed De Kuip stadium had been simmering for a while, with winger Royston Drenthe in the thick of the trouble. His late tackle on Gerrard in the dying minutes caused uproar with players from both sides converging in an angry melee, and Gerrard was seen to shove Theo Lucius.” Shove? Do you shove someone in the face? The Sun pays more attention to the “roaring and snarling” Wayne Rooney in their headlines, however, Gerrard does get a mention. “Feyenoord winger Royston Drenthe sparked the trouble. He caught Gerrard with a nasty challenge, Kop midfielder Javier Mascherano then fouled the Dutchman who reacted after Daniel Agger kicked the ball towards him. In the fracas that followed, Theo Lucius repeatedly shoved Agger before Gerro moved in and seemed to slap the Feyenoord man on the side of the head.” Seemed to slap him? Or did he actually just slap him? The Mail’s headline is merely in reference to Rafa’s comments. The Guardian’s headline reads, “Steven Gerrard and Jose Reina helped save the Reds some face in a fractious Rotterdam friendly.” The Independent’s headline reads, “Gerrard rescues Liverpool in battling finale.” The Times does not report the story.

I can’t even imagine the stories we’d be reading about today if Rooney had punched somebody in the face in a friendly. Regardless of whether he scored a goal or not, his face would be plastered all over the back pages. Talk of the thug and his petulance would be ringing in our ears. 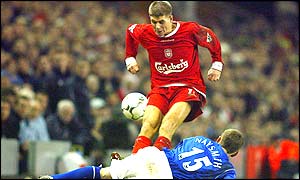 So this is just the latest in a long list of double standards United fans will see, which we can file away for future reference the next time it occurs. Steven Gerrard is a media darling, and the dippers will continue to claim he should be England captain and that he is the greatest player in the World, despite all the diving, cheating and violence. Excuses will always be made for him, and he will always be let off the hook. After his horrific two footed “challenge” on Naysmith back in 2002, Gerrard claimed he would never intentionally hurt an opposition player, and Houllier argued, “you have these things in derbies.” Gerrard punched someone last night, and Rafa simply had the referee at fault.

When Gerrard finally has the balls to hand his transfer request in and stick to it, after another failed “this is our year”, maybe even the dippers will be able to see him for what he really is. A brilliant midfielder, who is also a thug, cheat and diver.