What If Rooney Grabbed The Red Card?

I was fortunate enough to be at Old Trafford to watch the lads batter Chelsea last weekend. At half time, I watched the highlights, with Rooney coming close to scoring in the opening minutes, with Mikel getting sent off for his foul on Evra, Tevez clinching his first United goal, Joey Cole bringing Evra down in the area…and whilst watching this, I couldn’t quite get over John Terry’s reaction to Mikel’s red card.

It reminded me of the World Cup 2006. I’d gone to the bogs when Rooney got sent off (so as you can imagine, I got quite a lot of stick for it. Wayne didn’t get sent off because the ref felt he stamped on Carvalho, he got sent off because I was in the toilet, and me leaving the room meant the dreadful events occurred. Oh to be a superstitious twat eh?) and I still remember the sickening feeling I got when my mate said “Rooney just got shown the red card.” Don’t get me wrong. This isn’t because I’m a massive England fan, far from it, but because I knew the grief he was going to get for it. One of your players letting down England is one of the worst possible things, because whilst you can win the Treble on the back of your star man getting sent off for England in the World Cup, or just the Premiership as was the case last season, the stick you have to get for the year/s following is annoying beyond belief.

When they showed the replay, I wanted to take the red card out of the Argie bastard, Elizondo’s, hand, but it couldn’t be done. It would have been a dream scenario to stop Rooney from getting sent off, to swipe the card and pretend like it hadn’t happened, but of course, this wasn’t possible.

When Mikel got sent off for his foul of Evra last weekend, I imagine lots of Chelsea fans wanted to take the card out of Dean’s hand. Life without Mourinho was depressing enough, and no Chelsea fan wanted to see that happen days before travelling to play the Champions at Old Trafford. To see one of their players get sent off with half an hour played must have unbearable, and what those lads wearing those luminous yellow shirts would have given to make the refs actions undone. However, that’s not possible. As much as we may disagree, the refs word is final, and there’s nothing you can do about it…

…well, unless you’re John Terry, that is. If you’re John Terry, strutting your stuff with the captain’s arm band whilst playing for Chelsea and England, it seems you feel slightly differently. If you have the country constantly talking you up, telling you you’re the bravest, most committed and strongest defender of the lot, it seems as though you feel you’re above the usual rules of football. You’re special, you can do what you want. Aside from the usual sporadic handballs, you also have the power to change the referees decisions. If your manager leaves, the special bank of “Chelsea team spirit” is close to empty, and one of your players get sent off, it’s alright for you to grab the red card from the ref. Right?

John Terry was so passionate, dedicated and loyal to his team (not the team of his father though, I hasten to add, who is a die hard United fan and was desperate for his lad to sign for us) that he reacted as any true and proper fan would, and grabbed on to the red card as the referee tried to hold it up to Mikel. Whilst it is unacceptable to hold your badge up after scoring an injury time winner, the FA deem it totally acceptable to hold on to the ref’s red card when he’s sending off your team mate. It all depends on which badge you’re grabbing, and which team’s player got sent off, of course.

I wonder if the passionate, dedicated “thug” Wayne Rooney tried to take back a referees decision, if it would be met with such nonchalance. Whilst Chelsea have been charged for failing to control their players (again), no action has been taken on John Terry. Would Rooney be let off the hook if he took hold of the referees red card when his team mate was being sent off? Would Rooney be the victim of a poor refereeing decision if he was shown a red card for miscontrolling the ball and then showing studs in the resulting challenge? 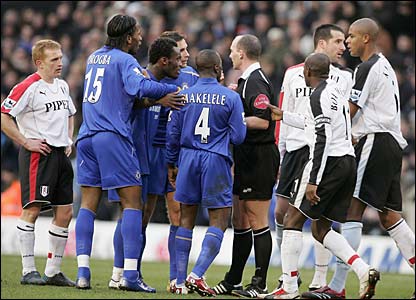 Chelsea have been guilty of four charges of being unable to control their players in the past eighteen months, and whilst the punishment has yet to have been dealt out, it is likely another fine will be dished out to the blues. Considering the man in charge is so rich he could drop £20,000 out of his back pocket and feel too lazy to pick it up, the FA are kidding themselves if they think their petty fines are going to make any difference to the poor behaviour of Chelsea FC. Chelsea faced trouble in March 2006 against Fulham, when the blues lost 1-0 and Gallas gestured to the fans following his sending off. Fans of both teams invaded the pitch and kicked off. Two weeks later, with sanctions from the FA proving a waste of time, they were in hot water again. Makelele was fouled by former red, Wallwork, in a game which saw Robben sent off earlier. The players surrounded and pressured the referee. Most recently, the big fight between Arsenal and Chelsea in the Carling Cup final earnt Chelsea more time in the FA’s bad books.

So Chelsea can thank their lucky stars that yet again their poor behaviour will not be dealt with successfully. It is worth their while to put pressure on the referee (it certainly stopped Halsey from sending off J Cole after his dreadful challenge on Ronaldo at the weekend. His protests of innocence make it all the more frustrating) as the worst punishment on offer is a few thousand being dropped from Roman’s account. Until the FA provide punishments which act as a deterrent, Chelsea will continue to act as though they are above the rules.

I can’t imagine the reaction of the country if Rooney had been the one to behave as John Terry, and that is expectation we have upon a twenty one year old. Why the expectation upon Terry is not higher is beyond me. Why this country doesn’t put more pressure on the England captain to behave suitably than it does its young striker, is beyond me. It surely can’t all be to do with the colour of their shirt, can it?

Whilst Ronaldo is getting booked for being fouled in the area, and Ashley Cole is permitted to throw himself to the ground wherever he wishes and goes unpunished…whilst John Terry isn’t even highlighted for acting as though he is beyond the rules in his response to the referee, and Rooney is vilified for swearing at the referee for making a wrong decision… then what can we expect?

We’re the Champions, we’re going to get a raw deal (regardless of what the lazy journalists who quote facts about penalties awarded in front of the Stretford End ten years ago want to say) and we need to rise above it. If our players conducted themselves in the way Chelsea’s have over the past few years (post Jose as much as during his reign) they would have been ripped to shreds, and I challenge any rival fan to sincerely state the contrary. And that’s not fair, and that’s life. If we can win whilst playing fair, as we have done all season so far, then I am more than happy.