What Penalty? Three Points In The Bag 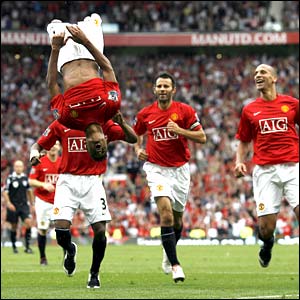 Listening to a match on the radio is one of my most hated things. The commentators are far too excitable for my liking, and I often find myself celebrating a goal, only for me to hear “…and it’s gone wide” midway through my cheers.

I was unable to get to the Spurs game on Sunday, so was forced to listen to it on Five Live. It was horrendous. A dull 0-0 can be pretty painful with these volatile commentators, so a game with penalty appeals, goal line clearances, and hit woodwork was close to unbearable. The final whistle couldn’t come soon enough, and 1-0 was certainly good enough for me. With great chances from Rio, Giggs, Carrick and Scholes, I was just relieved that finally, we’d put one in the back of the net.

I had been given the impression that Nani’s goal was a scorcher, but that really, United should have had two clear cut penalties against them prior to the goal. And you know what? I couldn’t care less. For those of you who read my articles often enough, you will have seen my last article “Time For Penalties, Own Goals and Deflections.” Up until today, we couldn’t buy a goal, and whilst our rivals were being handed goals on a plate from the opposition and referee, we were hitting the woodwork and watching the ball roll painfully close to the line. As far as I was concerned, it was about time we got the luck and could start the ball rolling, and I couldn’t give a shit less what Spurs had been denied.

From the ten minutes or so I got to watch in the highlights, we looked pretty good. Not as good in our three previous games where we failed to pick up maximum points, but we put some good moves together and had some great chances to go ahead. 433 doesn’t work for us, and I look forward to the return of Ronaldo so we can sort out our midfield, but we got what we needed from the game.

I eagerly awaited the penalty claims, just to see how severely Spurs were robbed. Up came the first incident, where Vidic had fouled Berbatov in the area. But then, when you watch it, rather than listen to an eccentric commentator, you can see that clearly Vidic has his eye on the ball, Berbatov is the one to collide with the defender, and it was never a penalty. Thankfully Rio was around to clear before it got to the line. The second incident was then shown, where Brown handles in the area. Yeh fair do’s, that was a penalty, Wes blocks the ball with his arm. But then you watch it again, and just as Sir Alex and Wesley said post match, the ball was actually blocked with our defender’s chest. MOTD2 kindly zoomed in and highlighted the incident, just in case there was any doubt, and reinforced the truth, that is too was not a penalty.

I hope Alan “dipper” Hansen, who was quick to get his match article out, is left blushing now after seeing the replay. “Wes Brown clearly handled the ball,” he said (tee hee). “It would have been one thing if Howard Webb had given a penalty but, had he done so, he should also have sent Brown off.” Oh, how embarrassing Mr Hansen. I hope the Sports Editor at The Telegraph has words. The Independent, however, whose article was not written by a scouser lover, reported the incidents more truthfully, stating that “the replay showed it struck his (Wes) chest, and once again Webb waved away the appeals which were especially forceful second time around. The week after Rob Styles’ aberration at Anfield, Webb made two excellent decisions.” Yes there was a poor decision made in the favour of Chelsea last week, but that has nothing to do with the referee making two correct calls at Old Trafford on Sunday. The commentators were all too quick to quote stats on penalties at Old Trafford over the years though of course. I hope they are left blushing after watching the replay as well.

So it wasn’t the most convincing performance, not by a long shot, but it’s points in the bag, and that is what counts. Without our two best players, who both score and assist more goals than every other player in our team, then I am happy to take the points and the goal against Spurs. And what a goal it was.

We have seen impressive goals from Nani in the pre-season, and whilst I have been impressed with the transition he’s made from the Portugese league to the Premiership, something which took his role model Ronaldo far longer to accomplish, we had yet to see him produce the goods in our league. However, today’s goal was an absolute beauty, and a superb way to open up his scoring for our club. He created the goal for himself, bringing the ball away from the defender, and unleashing a great strike to beat England’s Number One.

So at least we’re getting there. Beggars can’t be choosers, and whilst I’d love to see us play the football we did against City and pick up three points (which no doubt we will do on countless occasions this season), right now, we have to put the emphasis on the points. There were mistakes and there were slip ups, but we did play good football, and we did score a cracking goal.

This part of the season just feels like damage limitation. I don’t see any real leadership on the field without Gary Neville, and whilst creative and exciting, we don’t seem to have the convincing and terrifying element Rooney and Ronaldo provide us with. We need a player who can finish, and with no Louis Saha, we’re relying on a player who is just about match fit, who isn’t an out and out striker, and who can count the games he’s played for us on one hand. We need to be picking up the points and trying to get as close to the top as possible. When Nani, Hargreaves, Anderson and Tevez settle in, and when Rooney, Ronaldo, Neville, Saha and Solskjaer return, then we can expect the best from them. Then we can expect them to play like Champions as well as score like them. Until that point, I’m happy to scrape by. Although my blood pressure will be considerably higher if every match is like the Spurs match, I’ll take it if it means three points in the bag every week until we have our best team available.

We have Sunderland on the way, and I cannot wait to welcome Keano back to Old Trafford. It really will be a special day, and whilst I fully expect him to be hard faced and assert his loyalty to Sunderland, I hope and expect the crowd welcome him as warmly as we did when we saw him off. Still, I’d take a 1-0 over his lot any day, and enjoy an afternoon of booing Richardson (something I retrained myself from doing whilst he was still a red). Let’s hope Sunday’s result was the beginning of our season, and that we can keep hitting the back of the net every week. We’ve still got a long way to go, and life is far more difficult than it needed to be, but we’re on our way back.