When a United fan first meets another United fan, it doesn’t take long for the topic of conversation to drift to the European Cup final 1999. Where were you? How did you celebrate? Where did it rank with great moments in your life?

Yesterday, a reader of RoM shared their memory of that brilliant night, which comes as a massive contrast to how the majority of us enjoyed that evening! 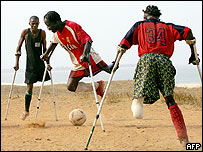 Sierra Leone, in Western Africa, was split by a raging civil war which lasted for ten years, in which tens of thousands of people died. The rebels were guilty of heinous crimes, with their trademark being to butcher those who opposed them, chopping off their hands and feet.

This war ended in 2002, three years after that night at the Nou Camp, meaning reds in Sierra Leone had a more difficult time in watching the game than most of us! Here is Chernor Jalloh’s story…

I am a Sierra Leonean living in Freetown, our capital city.

Before the 1999 Champions League final, the RUF (Revolutionary United Front) rebels had attacked Freetown and caused a lot of destruction and killing so many people including my elder brother, Umaru Deen Jalloh.

After negotiations with rebels had failed, the government and the international community resorted to using force to get the rebels out of the city. A Nigerian led intervention force was sent to Sierra Leone to fight the rebels out of Freetown.

After about a month of fighting, the rebels were cleared off the city and they sought refuge in the hills surrounding Freetown.

The then SLPP government led by Tejan Kabba imposed curfew in the city first starting at 3pm local time. As stability seemed to return to the city the curfew was shifted to 6pm and that was the period when the Champions League final was played. At that time, I managed to watch most of the Premier League games because they are played in the afternoon. I managed to watch the FA Cup final against Newcastle and some other games, but my main worry was the Champions League final which would be shown in the evening, after the curfew. I had to scout all over the place for a cinema that is willing to take the risk of showing the game. No cinema around my area was willing to take such a risk as the government troops were killing flouters for fun.

My mate, knowing how passionate I am about Manchester United, arranged for us to watch the game at Big Master on a TV with a zero tolerance for noise. We arrived there at 5pm and we were taken to a very big and dark parlour where nobody was allowed to celebrate or make any form of noise that would alert the government troops around. We sat there nervously until the game finally started. I had a small radio that was always tuned to BBC World Service and immediately after the focus on Africa news ended the commentary began whilst we were watching.

Whilst listening to the commentary I realised that the radio was faster than the pictures from the telly. I almost flouted the in house rules when I heard about the Bayern’s goal on the radio first!

Just after our equaliser, the light was taken by our National Power Authority. I suspect it was as a result of heavy gun shots that we had heard very close to where we were watching. I did not see the winning goal live but heard it on the radio amid heavy gun shots.

My father was furious with me absconding from home since about 2pm the previous day. Our family was mourning the death of my bother and my dad threatened to send me to Conakry if I was ever to leave the house for more than two hours! After getting in enough trouble from him, I called my little sister to tell her where I actually was and explained to her that United had won the European Cup but she had no interest in football.

It took me two weeks to see my mate again to talk about football because I hadn’t been allowed me to leave the house. It was a conversation that was worth waiting for though!