Who's Speaking The Truth - Wenger or Fergie? 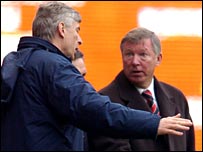 Arsenal moved back to top of the table yesterday after beating Everton 4-1, a scoreline which flatters the Gunners. Wenger’s men went a goal down, but fought back to get the three points. Replays show that the crucial goal which put Arsenal in the lead, deflating Moyes’ players, was handled by Eduardo before it found the back of the net. Arsenal went down to ten men after Bendtner was shown a second yellow for a challenge which was arguably worthy of a straight red. As the game progressed, Everton’s Arteta was sent off as Fabregas writhed around on the ground in agony, after Arteta’s elbow made contact with the young Spaniard’s face. This isn’t the first time boy wonder has made a meal out of nothing in attempting to get a player sent off, probably learning from Mr VaVaVoom.

After the match Moyes laid in to Wenger’s men, saying “I don’t make the rules, it was probably the wrong decision by the referee to show a yellow for (Bendtner’s) tackle, it should have been a straight red.” He then commented on Fabregas’ broken bones. “Fabregas obviously has a broken jaw or he would not have rolled around like he did.”

Audaciously, Wenger responded to the situation, saying, “I do not think Fabregas made more of it than it was.” Really? Mr ‘I Didn’t See It’ thinks that the contact on Fabregas warranted him rolling around on the ground, feigning agony? Honestly?

Another manager who I think might be telling a few porkies this week is Sir Alex Ferguson, who alludes to the fact it is now Arsenal who have the best chance of winning the title. “I always feel if you reach New Year on top you have a massive chance,” said Ferguson. “We still have a great chance but obviously it was disappointing to lose the way we did.” I completely understand why he says what he has, a verbal kick up the arse for our players who just didn’t show up at Upton Park yesterday, but I don’t quite believe him. In the same way players, particularly at Arsenal and United, keep insisting it’s still a “four horse race”, or in the same way Jose Mourinho was insistent that all the pressure was on us last season, not him, it sounds as though Ferguson is saying what he is expected to say, and what he thinks he will aid United’s title challenge. Does he really believe that Arsenal have a better chance of winning the league because they’re starting 2008 two points ahead of us? I don’t think so.

Roll on Tuesday, when hopefully our players can ‘prove Ferguson wrong’ and show that we’re the team with the best chance of retaining our title!