Why United With Mourinho Would Be A Disaster 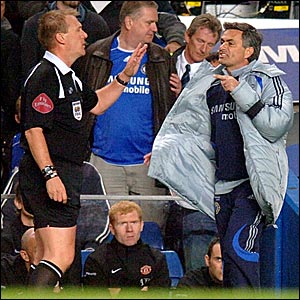 Slightly hungover, I woke up earlier than I should today, with the butterflies over today’s match keeping me awake. It is a big game and I really would like to add to the Chelsea depression by getting a good result against them today. Whether this will happen or not is a different matter, but we will certainly get enough mocking chants off the ground to meet the Chelsea fans who do travel to Manchester for the game (but if less than 25,000 could be bothered to show up at Stamford Bridge this week, I wouldn’t hold my breath on seeing many of them on the M6 today).

Of course the focus of most of these chants will be Jose Mourinho, the self obsessed drama queen, who has seemingly put our country under a spell, forcing us all to be obsessed with him as well. Ashamed I admit, his departure has absolutely fascinated me. I’m hungry for any bit of information about why he left, who he rowed with, and where he is going next.

If asked two months ago would I fancy seeing Mourinho as the man to replace Ferguson, it would have been an outright “no”, however over the past week when the press started suggesting this could be the case when Sir Alex retired, my opinion had softened slightly. Is it a scenario I would be happy with? Would he be good for the club? Could he be successful here? Could we love him? I thought I knew all the answers to those questions, but now that he is not with Chelsea, I didn’t feel so sure.

I read an interview with him today in the News of the World, where he says he wishes he could gather all the fans together and say goodbye, but concedes this wouldn’t be possible, as they’d crush him with their love for him. I think that sentence alone reminded me why I had been so sure about my feelings on Jose and United, and I carried on thinking about it.

I was just a lad when Ferguson was appointed manager of United, and the only United teams I have known and loved were the ones he created. He is United to me, he’s the man that made all our dreams come true in the 90s, he’s the man we’ve backed for years in rows and disagreements, he’s the man who has built team after team of Champions, and if any manager is special in the World today, it’s Sir Alex Ferguson. Maybe it is my love and admiration for our current manager which makes it impossible to imagine Jose Mourinho or any other man in charge of our club, or does it run deeper than that? Are my feelings against Mourinho more personal than merely not wanting to contemplate anyone replacing Fergie?

For years on forums I have discussed Mourinho with Chelsea fans, who rant and rave about how amazing he is and how his record speaks for itself. My objections to that can soften now that he is not associated with a club I have grown to hate. Of course he has had a successful career, and for a young manager too, but is he good enough for United? The Chelsea fans would have cried “of course he is”, but would they be right?

Mourinho was appointed as Chelsea manager following his successful stint in Portgual, finishing the season as European Champions. He had lead Porto to success in the league and in Europe, and therefore, along with his charismatic personality, was an obvious choice for Abramovich to lead the team he wanted to dominate the globe. On paper, he had it all going for him, but in reality, do his past achievements make him good enough for United?

In the 2004 Champions League, Porto came second in their group, winning half the games they played, finishing below Real Madrid and ahead of Marseille, then the seventh best team in France. In the first knockout stage they beat United, after scoring an injury time equaliser at Old Trafford, after Paul Scholes’ second goal of the night was wrongly ruled out for offside. They then went on to beat Lyon, Deportivo and Monaco, to be crowned Champions of Europe. The only giants of Europe they beat that year were us, and that was thanks to the poor judgement of the linesman. Does that mean Jose is a great manager? But hold on, let’s not forget the league titles he won in Portugal too, right?

In the season before Mourinho took charge of Porto, they were the second best team in the country. They had lost out on the title to Boavista by just one point. He then guided that team, who were just one point worse than the Champions, to two league titles. Winning the league anywhere has to be an achievement, but winning the league in Portugal after being handed a team painfully close to already achieving that goal, is not something I would get too carried away with.

So then he came to Chelsea, after previously saying he was more interested in joining Liverpool than he was the London outfit. He inherited another great team, this time from Ranieri, who guided Chelsea to the semi finals in Europe, and second in the league behind Arsenal’s unbeaten side. He spent huge amounts of money in his first season, with Drogba and Carvalho (who cost £44 million between them) the only two worth spending much time on. Mourinho’s greatest players were the ones there before he arrived, Lampard, Cech, Terry, Makelele, Robben, Gudjohnsen and Duff to name a few. In his three year spell with the club, he has record in the transfer market has been pretty poor. The Chelsea team which will walk out at Old Trafford today is not of the same quality as the team that played us on the opening day of the season in 2004. He has spent masses of money, but the only players which stand out as being great buys, are the high profile players all top managers were interested in. Masses of money has been spent, but is the team any better for it?

Ferreira, Kezman, Tiago, Jarosik, Del Horno, Maniche, Hilario and Boulahrouz are just a selection of the poor signings Jose has made in three years. These players cost a fortune, and most were sold on at a loss within a season or two. Drogba shone for Chelsea last season, but only when Mourinho was forced in to playing a formation he didn’t want, after Shevchenko was introduced to the club by Abramovich. Essien, who broke Chelsea’s previous record transfer fee, is a worker and a quality player, one which we were very keen to sign, as were most if not all the big clubs in Europe. Out of the twenty or more players Mourinho has signed, for a figure totalling hundreds of millions of pounds, those two are the only two which deserve much praise. The likes of Kalou, Shaun Wright-Phillips, Malouda, Ashley Cole are by no means flops, but we have yet to see really what they are capable of. In the same time period, Ferguson signed Heinze, Saha, Rooney, Van der Sar, Vidic, Evra, Carrick and Hargreaves who have(/will) hold down first XI places in our team.

Not any manager could win the league with the team Mourinho inherited from Ranieri and the money spent, but I’d say any good manager could. The manager doesn’t have to be special to turn the second best team in England, with the quality players they had and the money he was given, in to the best team in England. You do not get listed alongside the best managers in the World for doing that, and then to lose the title because you don’t have a squad capable of dealing with injuries, despite the hundreds of millions spent, then your reputation certainly should take a knock.

Jose Mourinho was hired by Abramovich to win the European Cup, and after three years of trying, after millions dished out on players, Mourinho came no closer to winning it than his predecessor.

Speculation suggests one of the reason Mourinho was forced out is because Roman craved a more exciting style of football. Whilst Chelsea had been successful with their effective, defence minded strategies, Abramovich wanted to see his multi-million pound team striking fear in to their opposition with their blinding attack. With all the money in the World, with skilful and exciting players like Joe Cole, Arjen Robben and Eidur Gudjohnsen, to name a few, Mourinho could not, or would not, do this. United’s whole ethos is based on attacking and exciting football. Would Mourinho be able to change and be successful promoting that style with our team?

Now whilst this is all doom and gloom, and anti-Mourinho, it is important to remember his good qualities, if we are going to assess the situation seriously. For all his arrogance, for all his petty comments, for his false accusations, for his tapping up scandals, for his failure to accept blame, and for his extreme hypocrisy, Jose Mourinho gives the players the self belief to succeed. As the Chelsea players sobbed when Mourinho told them goodbye, they would be sure to be contemplating their future. Can Joe Cole perform like he has for Mourinho with a different manager in charge? Can Drogba keep the golden boot without Mourinho’s confidence and belief in him? On top of their ability, Mourinho instilled the hunger and passion to win in to them. Whilst all their “team spirit” bollocks makes me feel a bit sick (and I only hope all the players don’t go around hugging each other again before kick off as they did last time they visited Old Trafford), it certainly seems to do the trick.

Jose Mourinho as he is though, he is not a manager I’d want at United. As both United and Chelsea have suffered from less than perfect starts to the season, United’s likely due to the missing fire power of Rooney, Saha and Ronaldo, and Chelsea suffering the same, with no Drogba and Lampard, Mourinho is the only manager to constantly remind the press this is the case, making excuse after excuse. When Chelsea won the title the season before last, with United plodding through a season to finish eight points behind, struggling with more injuries than I’ve seen us go through in over a decade, Ferguson did not do interview after interview talking of how being without so many key players for so long prevented us from being Champions, and our players graciously followed suit. When Chelsea were outclassed for the entire season by United last year, Jose Mourinho lead the excuses, blaming the injuries, stating they would have been the Champions if it was not for their injuries, and his players ungraciously did the same.

If Mourinho was to go away, learn some humility, be humbled by opposition, struggle to turn a good side in to a great side, then maybe he could have a future at this club. The Chelsea bubble should have well and truly burst by then, large proportions of their fans returning to “support” Arsenal and United, and we could have the new and improved Mourinho leading us to success. But for me to be happy about Mourinho taking over in the future, as has been reported, he would have to change a lot. Is that possible?