Why We Love Keano 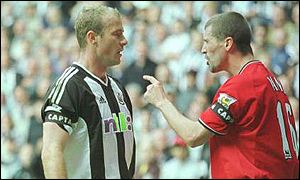 Today is a day I’ve been looking forward to since the fixture lists were announced. It’s the day that Roy Keane returns to Old Trafford. I was one of the lucky 70,000 fans who got to say farewell to Keano at his testimonial, and the crowd was fantastic. Keane embodied so many qualities in a player that United fans were looking for. Ferguson summed this up perfectly.

“He wasn’t the best player [I’ve ever had] in terms of ability but in terms of influence he was the best player,” said Sir Alex. “You’ve got to understand what I mean about that. Certain people do well in life, with the determination and fire in their stomach to get them there. Robson had it, Willie Miller at Aberdeen at it, he was the nub of the team. Robson was part of the team I inherited but Keane was the nub of the team from then on.

“He was a fantastic influence, with the determination to win, fire and everything you would expect. I see myself, that’s why I always say he’s the best player. There’s a certain pride in that. I think most managers like to see themselves on the pitch and, in Keane, I saw parts of me like that, like with Robson and Miller.

“Through certain, I wouldn’t say limited ability, not true that, good ability but not the ability of a Cantona, a Giggs or a Scholes. They could take themselves above that with drive and ambition to get there. Even in sprint sessions, Roy was not the quickest but if you put a ball there he was the quickest to the ball.”

United forums all over the net have been following closely the progress made by Keane since taking over at Sunderland. Secretly, and not so secretly for some, we want Keane back at United, as our boss, instilling the same drive, determination and commitment to winning he had when in the centre of our midfield. He has learnt from the best, and it would be a dream come true for him to emerge as a manager capable of stepping up when Sir Alex retires.

Keane’s day will be shared with Solskjaer now though, and I imagine the atmosphere to be as electric as it was on that day we said goodbye to Keane. Keane and Solskjaer are possibly the two most important players in bringing the European Cup back to Old Trafford in 1999. Without Keane’s heroic and gutsy performed against Juventus, as well as scoring the goal that started off our comeback, and without Ole’s toe guiding the ball in to the back of Oliver Kahn’s goal, we wouldn’t have had that fantastic night at the Nou Camp. I have been at Old Trafford to see Andy Cole, Nicky Butt and Teddy Sheringham return with their new clubs, and all have received a fantastic reception, with us singing the same songs we sung back in 99 for the players who made our dreams come true. I can’t imagine any of their welcomes will compare to what will happen today. Ferguson yesterday gave his opinion on this.

“He will get a great reception,” he said. “I think that’s one of the things that makes me proud of being manager of our football club and it tells you what a great club we are. When we have players come back to play against us, or in the case of Roy tomorrow and in the last few years Bryan Robson, Mark Hughes and Steve Bruce coming back (as managers), they get a fantastic reception.”

So just in case you needed reminding, here is a short video showing a selection of the reasons why we love Roy Keane. KEANO!