Would You Still Have Queiroz As Next United Manager? 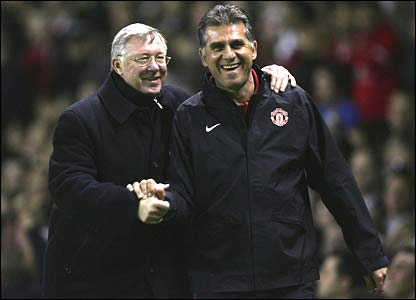 Sir Alex Ferguson conceded that his time as United manager would be up within the next “two to three years”, meaning our immediate thoughts went to which man would be good enough to fill his shoes. At RoM, Carlos Queiroz was the man backed to do the job, after spending years at the club where he was afforded more time and input than your average assisted manager.

Mark Hughes, who had previously been a favourite for the job, ruled himself out of the running when he took the post at City, then Queiroz seemingly did the same when opting to replace Scolari as the Portugal boss.

Since then, Eric Cantona, Ole Gunnar Solskjaer and Roy Keane remain as the favourites, amongst United fans, for the job.

However, Queiroz has today refused to rule himself out as a potential candidate, claiming he is amongst ever other coach in the World that dreams of managing United. Question is, would you take him back again?

After winning the league with United in 2003, the offer to manage Real Madrid was too tempting for Queiroz to turn down. Following a failed season with the Spanish giants, thanks largely to the negative input of president Florentino Perez, Queiroz was given a second chance at United. Clearly Fergie saw something in Queiroz and had already earmarked him as the replacement.

“It is an honour for me to share the dreams and expectations of all Manchester United fans,” said Queiroz, upon rejoining the club. “I feel proud and happy with my decision. It is a commitment to Manchester United where football achievements and ambitions fulfil my personal professional goals. I would like to express my respect and gratitude to the board and Sir Alex Ferguson for the trust and confidence they have given me with this amazing and renewed opportunity.”

Two league titles and a European Cup later, Queiroz is unveiled as the new Portuguese boss, filling the spot vacated by new Chelsea boss, Scolari. Whilst bitterly disappointing, nobody could begrudge him the opportunity to manage the country he would regard to be his homeland.

Whilst for many, this was regarded as a move that would ensure he had no further part to play at United, Queiroz has today suggested he would be more than happy to return once the manager’s job was available.

“If you asked that of a million coaches, I think there is not one single coach in the world who does not have that dream. I’m one of those million coaches that shares the dream,” said Queiroz. “It was a very tough decision [to leave]. I had a fantastic time with a great club and it was a privilege to work with such fantastic players and with Sir Alex. To be part of his family was such a huge feeling, so to make the decision to leave for a second time was really very difficult. But I hope and think that people understand that the challenge of being the coach of your own country is one you cannot ignore.”

Queiroz’s contract with Portugal runs for four years, giving him a shot at the European Championships as well as the World Cup. If Ferguson was to stretch his stay to four years, or if Queiroz was unsuccessful with Portugal, it could mean Queiroz could still be Fergie’s successor. Question is, would we take him back a second time?