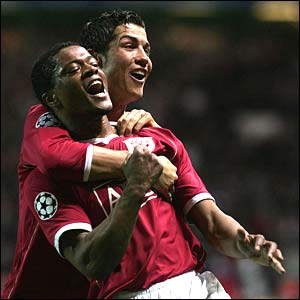 “Liverpool and Arsenal are great clubs but United is a completely different story. Inter were also trying to get me in the transfer window but there was only one club for me,” Patrice Evra said, after signing for Manchester United for £5.5 million back in 2006. It has been a long journey for Evra, which started relatively late in his life, moving on leaps and bounds from his teenage years of petty crime. He got his ‘break’ when he was seventeen years old, signing for a Sicilian club in their third division, then playing as a forward. He was linked with Lazio and Roma but the deals fell through, leaving him with a move up to second division club Monza, where he couldn’t get a game.

Evra returned to France, signing for second division Nice, where a fifteen minute experiment in the left back position turned to his permanent post, much to Evra’s displeasure. Despite his unhappiness with his new found place in the team, he was named the best left back of the division come the end of the season.

Barcelona and Auxerre showed interest in him, now aged 21, but Didier Deschamps convinced Evra of a move to Monaco. He made it to the European Cup final in 2004, not before suffering a terrible tackle from Chelsea’s Jimmy Floyd Hasselbaink in the semi finals. He was left with a hole in his sock exposing a gaping wound, which later required nine stitches, and the Monaco trainer signalled for him to be replaced. Evra was having none of it. “I told him I’d smash his face in if he made me go off,” recalls Evra.

Fergie was interested in signing Patrice that season, but his advances were turned down, and United brought in Gabriel Heinze. Thankfully, Ferguson got his man in the end, bringing Evra to United in the January transfer window of 2006. It is well documented that on his first day of training with us he asked Neville the directions to the local church, so he could thank God for being given the opportunity to play for United.

Since then, he has established himself as one of if not the greatest left backs in the World, much loved for his crazy attitude and delightful performances on the pitch. He has often spoken about his joy of representing Manchester United and has fully immersed himself in the club’s culture and history. “I joined a club that has such a strong identity so I had to learn it,” he said. “I watched many cassettes, DVDs of Eric Cantona and have translated a lot of books. Now when an ex-player shakes hands with me, I know who he is.” He went on to say, “[learning about] the plane crash in 1958 moved me. When I take the plane with Bobby Charlton, I ask myself, ’how can he do it after what he has been through?’. I have more and more respect for this shirt. I advise everybody to be interested in his club, to identify yourself to it, it helped me.”

Evra has also spoken about his massive respect for the boss, saying, “when it comes to Alex Ferguson I just want to thank the Lord. Whatever may happen in the future, I have been trained by Alex Ferguson.”

When talk arose of a new contract for the full back towards the close of last year, Evra again reaffirmed his desire to play for our club. “My agent knows the situation, so I am just leaving it up to him and Manchester United,” he said. “In the meantime, I will just try to do my best and respect the shirt. I love to play for this club. It is a privilege to be a Manchester United player.”

In light of all this, I was amazed to read across the press today that Patrice Evra is demanding a huge £120,000 per week salary in his new contract negotiations. Whilst we can all agree Evra deserves more than the £36,000 per week contract he is currently on, it seems madness that he should be considered to be placed with the highest earners Rooney, Ronaldo and Rio. It just doesn’t make sense. Why would a player who thanks his lucky stars to be at the club, after struggling for years to make it to the top, demand such ridiculous wages, wages he surely knows he won’t be given? Maybe retracing the original story will give us the answers.

“Patrice Evra is on a collision course with Manchester United after demanding a staggering £120,000-a-week contract. The 26-year-old’s demands have caused a major stand-off with the club after his representatives insisted he deserves to be among their top earners.” Where did the story come from? The Mirror.

Before getting too carried away, slamming Evra for greed and idiocy, we should probably consider whether a story printed in The Mirror on a slow news day is something we’re going to take as gospel!

Do you think Evra is really demanding a £120k a week contract?