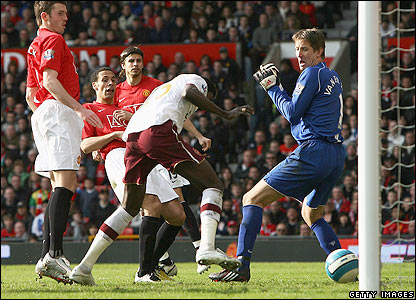 After all the whinging that has resonated from the Emirates in the last week or so, over referees costing them their title bid and place in the European Cup, I am over the moon to see those twats have their season ended at Old Trafford today, despite their cheating ways.

Adebayor’s goal was scored down at the other end and I couldn’t quite believe it. Not because an Arsenal goal hadn’t been coming. We would have been 2-0 down if not for the poor finishing from the Gunners, but because it looked like a simple enough save for Van der Sar to make. The players left him looking clueless on the line, Ferguson’s team talk left worthless as we were now chasing a game, rather than looking for the opening goal.

As our lot starting singing, my phone vibrated. “Cheating fucking cunts” was all it said. I wasn’t afforded the opportunity to see the replay of the goal until after the game, when we had no need rue their opener, and saw that cheating, lanky bastard, Adebayor, put the ball in to the back of the net with his arm.

I will wait until Match of the Day before passing judgement on what appeared to be a red card challenge from the same player on Anderson later on in the second half.

United showed the difference today between Champions and teams who win nothing. Decisions may go against you but you have to turn the game around regardless. You have to play in spite of poor refereeing decisions. If United had scored a goal in such a fashion, Arsenal no doubt would have been “robbed yet again by the referee”. However, the Champions weren’t going to settle for such excuses today. There was no need to spend weeks complaining to the press about refereeing decisions costing their season, as they showed the bottle and nerve to come back after being cheated in to going a goal behind.

It is also important to note for the second time Arsenal have travelled to Old Trafford this season, their team were guilty of the thuggery their manager and fans so often complains about. They collected six yellow cards in a match which saw the same petulance and poor gamesmanship which marred the FA Cup. On the upside, Arsenal will now be fined by the FA for the number of yellow cards picked up in one match.