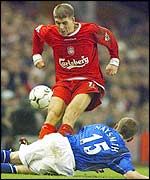 “Better late than never as Gerrard gets his MBE” reads the headline in The Times today. The article gets better, if you can imagine that, as you read on. “At last, one of Liverpool’s great quests for a significant honour has been realised. Nineteen months after their thrilling victory in the Champions League, Steven Gerrard, has been appointed MBE in the New Year’s Honours List. There was anger and disappointment in the red half of Merseyside when Liverpool’s comeback against AC Milan in Istanbul did not prompt official recognition, unlike England’s Ashes-winning cricket team. Rick Parry, the club’s chief executive, complained publicly, a campaign endorsed by The Times. That wrong has now been rectified.”Well thank fuck for that, we can call off the minute’s silence, Stevie G, the man who has tried to leave his “beloved” club twice for the money and success at Chelsea, has been awarded with an MBE.
Gerrard wants to thank the fans who have stuck by him (so obviously not the Liverpool fans who were burning his shirt when he announced he wanted to leave the club). “I’d like to accept this on behalf of all those people who have been so supportive to me throughout my career,” said the midfielder.

Now I remember the outcry last year over this. Liverpool had come back from a seemingly impossible situation to win the European Cup, and as pleased as the country might have been for them, there was utter disbelief when members of the team weren’t recognised in the New Year Honours List. As a United fan this of course struck me as strange, as when we had won the European Cup, again in extreme circumstances just a few seasons before, nobody batted an eyelid. That evening at the Nou Camp, in a squad of sixteen, ten of our players were British. Gary Neville, David Beckham, Nicky Butt, Andy Cole, Ryan Giggs, Teddy Sheringham, David May, Phil Neville, Wes Brown, Jonathan Greening. (Paul Scholes would have been included, and played in all the games leading up to the final, but missed the night against Bayern Munich through suspension.) Is there something I’m missing?

Maybe if we look at Steven Gerrard’s contribution to football and his achievements, things will start to make more sense. 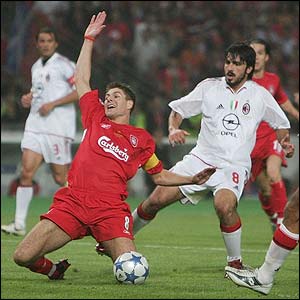 Now this isn’t me stamping my feet demanding that United players get recognised in the same way. That’s a fight for them to take on if they so wish. This is me questioning whether seriously such a fuss can be made over Liverpool players’ lack of “rightful” honours, when not a word was said, and still hasn’t been said, on United players missing out. Is this country really that blinded? Are we the only ones who can see the bin-dipping, badge- kissing, transfer-requesting, diving scouse bastard for what he really is? I suppose the bright side is that this will be the only thing Gerrard will be awarded with this season.