You're Not Special Anymore! The Decline of Jose Mourinho In Full 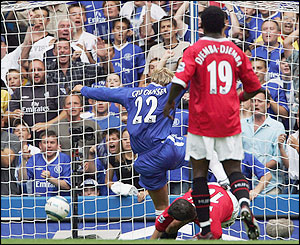 I remember distinctly reading the newspaper on the morning of our opening game of the 2004-2005 season and feeling utterly disheartened. For a United fan, the first day of the season had always been one filled with so much hope, regardless of what we’d won the season before. If we hadn’t won the league, I’d be confident of us claiming it back, and if we had won it, I was confident of us retaining it. Both of these feelings were completely justified as well, looking back at our years in the Premiership.

Before the 2004-2005 season, United hadn’t gone longer than a year without lifting the Premiership trophy. We won the league back to back between 1993 and 1994, then lost out to Blackburn the following year on the final day of the season, missing out on that third successive crown by just one point, despite having a better goal difference. Then a return of back to back victories for the following two seasons, before Arsenal pipped us to the post, again by just one point, and again in spite of the fact we had a superior goal difference. Then it was three titles on the trot, starting with the Treble winning year and ending in 2001. Then, for the first time in the ten years of Premiership football, United didn’t win the league and didn’t miss out by just a point. We finished behind Arsenal and the dippers and didn’t even have a cup competition to keep us happy. This was amended the following season, with United claiming top spot in the league again.

However, the next season, it was Arsenal with their unbeaten team that claimed the title, with United again finishing in 3rd, this time with Chelsea ahead of us. Roman Abramovich had bought the club at the start of the season which allowed Chelsea manager, Ranieri, to fork out a whopping £120 million that summer. Claude Makelele, Joe Cole, Wayne Bridge, Scott Parker, Hernan Crespo and Adrian Mutu were amongst the signings. This was the beginning of Chelsea as we now know it.

Jose Mourinho took over as manager at the end of the season and spent a further £105 million boosting the already impressive squad. Which leads us back to where I started, the first day of the 2004-2005 season, and reading the paper with the predicted lineups. It was then that I realised just how much work United were going to have to do to win back our title, with fading hope that it would be anytime soon.

Our squads were leagues apart, yet despite this, we managed to finish with a rather respectable 1-0 defeat at Stamford Bridge, with our attack stamped out entirely by Mourinho’s almost embarrassingly defensive tactics. Defending so deep they were almost in Craven Cottage, let alone Stamford Bridge, Chelsea scrapped and scraped their way to three undeserved points. New manager Jose Mourinho’s promise to supporters about “let’s have some fun” was presumably referring to after the game, wrote The Telegraph. As new dawns go, this was dull from Mourinho’s new men.

However, this wasn’t the first time we were bored to tears by Mourinho’s tactics, only to end up on the wrong side of defeat by the time of the final whistle. Had his Porto team, who defended, dived and fouled their way to victory, not managed that draw at Old Trafford the season before in the Champions League, that probably would have been the last time we’d heard of him. However, inept officiating ruled out the Paul Scholes goal that would have put us 2-0 ahead before half time, meaning we were cruelly knocked out in the final seconds after a Porto equaliser. With a relatively easy run against Lyon and Deportivo, then Monaco in the final, Mourinho’s Porto were named Champions of Europe, and was headhunted for the Chelsea position.

Following the defeat on the opening day of the season, to save us from playing Neville and Keane as our centre backs for much longer, Rio Ferdinand was to rejoin the squad at the end of the following month, after serving his ban for missing the drug’s test. Ruud van Nistelrooy missed the opening two months through injury, with Louis Saha making a couple of appearances before missing all of September with injury. This forced us to rely on Alan Smith and David Bellion for longer than our shame could bear, with Diego Forlan on the first plane to sunny Spain after the Chelsea defeat (where he scored on his debut, after going 11 games, dating deep in to the season before, without scoring for us. Fate would have it that he won the European golden boot that season, with not a single player on the continent racking up more goals than him).

Jose Mourinho’s Chelsea cruised to the title that season, thanks largely to the team Ranieri had built. Frank Lampard, Eidur Gudjohnsen, Damien Duff, as well as the players mentioned above in his £120 million shopping spree, and the signings of Arjen Robben, Didier Drogba and Petr Cech which he secured before being fired, were the real talent of the Chelsea side.

Mourinho deserves praise, of course, and we’ve heard it until we’re blue in the face. If you want to read an article droning on about what a genius is, go and find a Chelsea blog and you’ll be inundated.

January 2005
Accuses referee, Neale, of entering the United dressing room after his team failed to win.
“In the second half it was whistle and whistle, fault and fault, cheat and cheat. The referee controlled the game in one way during the first half but in the second they had dozens of free-kicks. I know the referee did not walk to the dressing rooms alone at half-time”

March 2005 on Frisk incident
Mourinho concedes he didn’t see the incident, if there was one, which lead to Frisk receiving death threats and walking away from football
“I just informed what people from my staff told me. I saw nothing, I wasn’t involved. I am always the first man to leave the pitch at halftime and some assistants told me what happened. I have to believe in the people who work with.”

February 2006
After Del Horno makes a challenge on Messi, with no intention of going for the ball, Mourinho lets rip.
“It is not a red card, of course not, and for the second time we have to play 55, 60 minutes without a man and the game is completely different. I shouldn’t speak about the game, because the game is not a game.”

April 2007 on Ronaldo
After United went five points clear at the top, following our 4-2 victory over Everton and Chelsea’s 2-2 draw with Bolton, Mourinho felt it necessary to dig his claws in to our young winger to make himself feel better, resorting to low class remarks about Ronaldo’s upbringing.
“It’s not even a game between me and him [Ronaldo],” Mourinho said. “It’s a game where a kid made some statements not showing maturity and respect. Maybe [it’s his] education, difficult childhood, no education, maybe [it is] the consequence of that.”

Two weeks later
“A player who wants to be the best in the world – who can be the best and perhaps is the best already – has to have sufficient honesty and maturity not to argue against the facts. If he [Ronaldo] says: ‘It’s a lie Manchester United have not had penalties given against them’, then he is lying. And if he is lying, he won’t reach the level he wants to reach.”

The so-called “breath of fresh air” became stale and repetitive. In his last full season at Chelsea, whilst he prattled on about injuries, he took his eye off the game and took the responsibility from his players’ shoulders. They were no longer to blame for slipping away in the title race, it was just down to bad luck. Injuries to Cech and Terry were the reason Chelsea were not to win the league, despite the fact Chelsea had the best defensive record in the league last season, and it was the lack of goalscorers that saw them fail to retain the title. In contast, Ferguson kept a lid on the injuries we endured (the most notable of those being Nemanja Vidic and Gary Neville who both spent more time out on the sidelines than John Terry) and cruised to win the league.

“The Not So Special One” has since be fired from Chelsea after he was booed off the pitch following a draw with European nobodies Rosenberg. A blissful silence resonated from the Premiership, our back pages were no longer filled with his face and latest outlandish quote, and MOTD no longer needed to spend time reeling through his latest ridiculous post-match interview. But that silence has ended. Jose is back.

“I made a mistake not to leave Chelsea at the end of last season,” he said this week. “I had an offer from one of the greatest clubs in Europe but I preferred to stay in London because I promised the fans that I won’t leave on my own initiative, and four months later I was fired.”

Avram Grant, who has been dubbed incompetent by many, myself included, has taken the title race down to the last day of the season and is in the European Cup final, the first ever in Chelsea’s history. Whilst some may use this to champion Grant, I think it says a lot more about Mourinho. This season, Drogba has been in nothing like the form he was last season (scoring just 8 league goals in contrast to the 20 goals of the season before), with influential Frank Lampard facing spells out due to injury, as well as reoccurring injuries at the back. Yet last season, with the same squad, Mourinho lost the title with two games to play, and was knocked out by Liverpool, the side Chelsea beat this season, in the semis.

So, is Jose bitter about this? He’d tell you certainly not. “So what if Chelsea win the Champions League? I won it too. So what if they win the Premier League or the cup? I won that too.” So there!

It has taken Chelsea fans some time to see the manager from the similar point of view the rest of us have for the past year or two, with probably the vast majority still hailing him as their saviour. One Chelsea blogger put it perfectly this week.

Before any of us start to worry the Messiah is really a self-centred individual who manipulated us into believing he could care less, he does allow himself some feelings regarding his Stamford Bridge departure – regret! Apparently, he’s taken this opportunity – when we’ve reached the first Champions League final in the club’s history (without him) – to express his regret at not having left Chelsea sooner.

Having made sure we understand he sacrificed himself so unselfishly, just for us, he says it was a mistake. But from a man who’s psychological skills I always admired, he’s let himself down a bit this time. Because, having seen us blame Roman and his band of merry men for so long, the subtle suggestion now is that those fans he cared so much about helped to bring about his downfall, such was his loyalty towards them. I don’t know why he doesn’t just get up on that cross and be done with it to be honest.

“Fuck off Mourinho” the Old Trafford crowd sang when the rent boys made a visit up North this season, on their first game since Mourinho’s departure. The sentiment still stands.